A 7 km of Caraman, Loubens-Lauragais is a charming village marked by the trade of cake, this deep blue dye that made the richness of the Lauragais in the XNUMXth century. You will discover in the heart of the village its impressive castle and its moat adjoining the church, as well as authentic alleys which have kept all their charm of yesteryear.

Stroll through the heart of the village

To start, take a walk on the main thoroughfare. You will discover the magnificent houses of the village, typical of our beautiful pastel country : house in coondage (Toulouse name to mean half-timbered) decorated with beautiful shutters painted in blue.

The large arcades bear witness to Loubens Lauragais' commercial past. The street you take was once lined with stalls. Under the hall, which also served as a prison, was once a large market bringing together many peasants.

Resume your way, push the gate of the alley : take a dip in the past by going under these " pountet »(Built footbridges overhanging an alley) which, in the past, linked one house to another. At the end of the street, the light ... but also a beautiful view of the Loubens mill ! Today he feels very lonely on his hill… because until the beginning of the XNUMXth century, there were two!

The Lords of Loubens and their castle

The origins of the Lords of Loubens date back to the XNUMXth century with William of Loubens, originally from La Réole in Gironde, who participated in the First Crusade alongside the Count of Toulouse Raymond IV in 1096.

Le castle that you see today is the result of successive changes over the centuries. We don't know what the original building looked like. It was very probably a small fortress, surrounded by a moat that you can still admire today ... The first transformations of the monument took place from the XNUMXth century, at the time when the Lords of Loubens got rich thanks to the pastel trade.

Did you notice the  statue of a Virgin with a weathered face sitting on a wolf, the child Jesus on her lap located in the castle wall, on the road side? According to a legend, the Virgin appeared to a child about to be attacked by a wolf and saved her, thus becoming the patron saint of the parish. It is this wild animal that appears on the coat of arms of the village...

The revival in the XNUMXth century

The seigneury of Loubens changes ownership: it is a Capitol (the municipal councilors of Toulouse were so called under the Ancien Régime) which bought it shortly before the French Revolution, Joseph-Francois de Gounon.
Did you know that he is the ancestor of the current owners of the castle? His son, Jean Mathieu de Gounon Loubens, completely remodels the interior of the castle. In his correspondence, he describes the work:

Never has the castle resounded so many blows, it's a sabbath of dust and noise!

The park, a green setting

During European Heritage Days, you will enjoy walking through this 4 hectare haven of peace, classified Remarkable Garden of France. 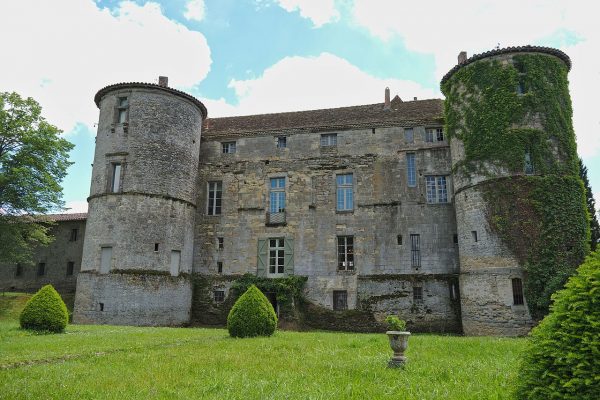